The dates and prices of the 2016 – 2017  lift passes have now been released. The Courchevel valley, including La Tania, will open on the 10th December 2016. This is a little later than the previous season which is a wise move from the lift operators, Societe des Trois vallees.  Meribel- Mottaret will open on the same date. Both areas are scheduled to close on the 23rd April 2017.

The UK Euro referendum may be more influential on the eventually price in £’s for lift passes next year. 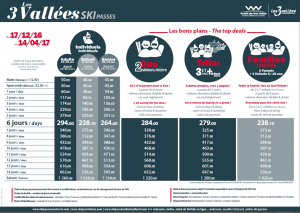 Like the Three valley passes, all 6 day pass have increased around 4- 5 Euros. As Courchevel prices are cheaper than Three Valleys passes, this is a larger percentage increase.

A Three Valleys Extension for a Courchevel pass is 33.50 Euros for and adult and 27.10 Euros for a child. 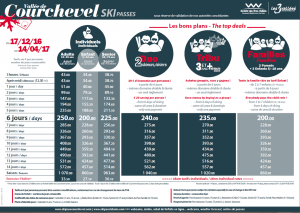 At the very beginning of the season (10th December to 16th December 2016) the lift passes will be reduced by around 20 Euros per person with even greater reductions to be found at the very end of the season (15th April to 23rd April 2017). Although seasonal weather can effect the number of pistes open at the beginning and end of the season, the amazing ability of Societe des Trois vallees to make snow and cheaper accommodation prices mean that it’s a great value time to experience the biggest ski area in the world.