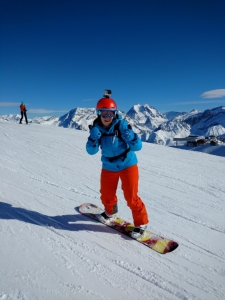 Bex starting at the top of Saulire

Once every couple of seasons its possible to ski from the very top of Courchevel,  to the very bottom of the Bozel valley. Luckily enough the recent conditions have made this doable, a huge snow fall followed by cold conditions has meant there is enough snow right to the valley floor.

We started off by heading up to the the very highest point of Courchevel, the summit of Saulire. With the Ski tracks app running to keep track of the descent we started our quest.

The first piste was the classic Combe Saulire red then, to spice things up, we then jumped off down the little used black called Bosses and tested our legs with a couple of moguls afterwards picking up the smooth blue run called Sources which joins the well known beginner piste, Verdons, to make our way in to the centre of Courchevel.  A brief pause to re-group and give the legs just a little rest.  Only 850m vertical descent done. 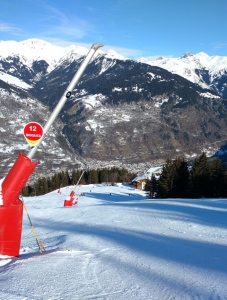 The first sight of the valley floor

Under the bridge in Courchevel to cruise the Plantrey green piste and then to hit the red Brigues down to La Praz. It’s at this point you get to first glimpse the village on the valley floor which still seems miles away.

The Brigues piste splits and instead of following the traditional track into Le Praz a right turn is needed taking a quick steep descent over a bridge crossing the main Courchevel road (was this not originally the bottom of the black run Jean Blanc?).

After this point there are no more lifts you can catch..  the bus back is your only option.

The last official piste is the red St Bon taking its name from the original Courchevel village it passes. At the bottom of this you are then off the official pistes and signs warn you that you are out of the limit of the ski area.

Knowing the area, the way down from here is fairly obvious, following the openings in the trees down and slightly east.  You have to pick your route a little carefully to avoid the odd tree stump or stream and the ground was a little rough but that is all part of the fun.

Then all of a sudden you find yourself in a French hamlet complete with horse trough, narrow streets and traditional French alpine houses and barns.  Our destination at 841m above sea level and a total descent of 1859m. 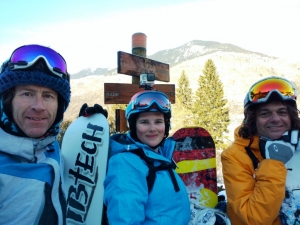 A short walk brings you  in to the centre the town of Bozel.

It was time to rest our legs and enjoy a well earned spot of lunch. We choose the popular Saint Roch 3 restaurant for a cool beer and pizza while sitting in the sunshine looking up at the mountain we had just descended. After a wonderful lunch we took the free ski bus back up to Courchevel to get home. 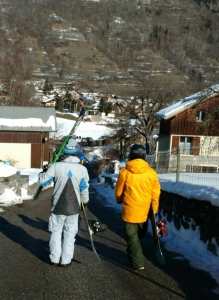 The walk to the centre of town

Is this the longest descent in the Three Valleys with out taking a lift? Studying a piste map its difficult to see anything longer. Maybe in the Meribel valley Creux Noirs (2705m) via Meribel Village to Brides Les Bain (600m)? But the snow conditions would have to be exceptional…